The reality series, which proves that you’re never too old for the adventure of a lifetime, gives celebrities and their parents memories they’ll “cherish” for the rest of their lives.

From zip-lining across the Niagara Gorge to shark fishing in the Atlantic, sky-diving in Nevada to handling 20,000 bees in New Mexico, each episode travels to a North American destination where celebrities take their parents out of their comfort zones and on wild bucket list adventures.

Global News sat down with White in Toronto to talk about his time on the reality show with his mom and to discuss his iconic character, Steve Urkel.

I had the amazing opportunity to sit down with @jaleelwhite today to talk about his episode of #50WaysToKillYourMum (which airs Aug 5) & of course we touched on Steve Urkel & Family Matters. Stay tuned for the full interview! 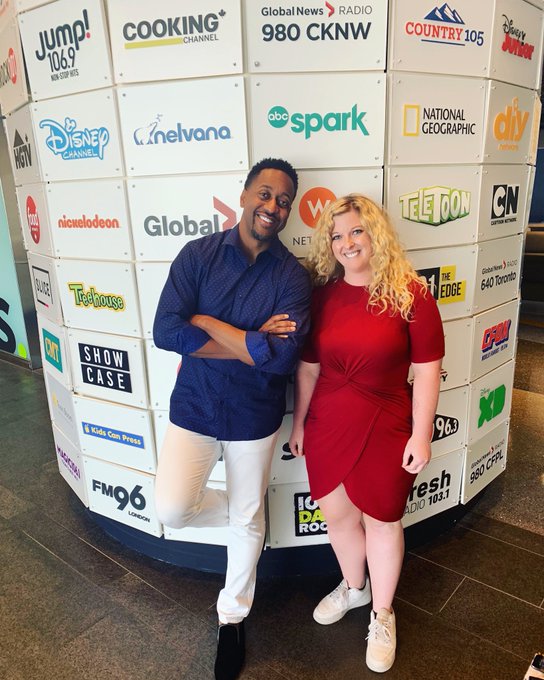 Global News: How did you convince your mom to come on a reality show with you?
Jaleel White: Money! I convinced her because in 2008 she had a bit of a cancer scare and I just really felt like most reality television was just not cut out for me. I just don’t fit in the mould of Love and Hip-Hop and the drama that they manufacture. I wish I could actually do it — it would probably be a great cheque to corner Ray J somewhere and duke it out (laughing). But that just doesn’t work for me or people who grew up with me with their childhood. They don’t want to see that, so every blue moon — whether it’s Dancing with the Stars or something like this — a reality opportunity comes along. It’s organic and the good news is the producer didn’t screw it up — they tried to because I just wanted to keep my mom out of water.

Why did you want to keep her out of water?
That’s just another area that I knew… leave that to some other parents that are aquatic and let them go do that. We keep her on land. I can push her in some ways that we can still get it done and they still manage to get her in the air. She was genuinely pushed in every direction and I took a risk with one of my events myself. And that was with the beekeeping stuff.

How did it feel to be swarmed by a bunch of bees?
It’s weird, you cannot get used to that because in your mind there’s just a hole in your suit, they’re gonna find it and you’re just gonna start getting stung a lot (laughing).

What’s your biggest fear?
Pretty much any animal from Australia. They have too much stuff down there like scorpions. It’s just too much. I feel like they have dingoes with horns. I don’t know (laughing). But snakes in general and heights with no bearing. I’m great with heights as long as I have some type of barrier that says ‘don’t go past that.’

So no free-falling for you?
No! I went hiking in Hawaii and it’s like, you get vertigo. The path can narrow to a point where it’s just like, it’s a fall either way. I do not like that, I had to stop. I also don’t like tight places because I get claustrophobic.

Do you feel like this experience brought you and your mom closer together?
Oh, absolutely! My mom has never gone on camera up until now. She didn’t even come visit me on Dancing with the Stars. This was the perfect opportunity for her. She’s just not an on-camera person in her mind. She’s predetermined that ‘I don’t want to be on camera.’ And then when she ends up doing it, I’m pretty sure she came off just fine. For that to happen after 36, 37 years of being in the business, for her to come across that enjoyable on the screen, it shows a lot about who I am and where I came from.

How proud are you that your mom completed everything?
She wanted the money, she wanted to see the grand prize (laughing). They just didn’t show it to you. I’m very proud of her, for the bees and the hot air balloon in particular. I know she didn’t want to get in the hot air balloon.

Switching gears quickly to Family Matters, Steve Urkel is an iconic TV figure, there’s no arguing that. How do you own that legacy because some stars like to shy away from it, but I feel like you own it in such an amazing way.
I appreciate hearing that. I love the character and I love all the characters that I played. It’s something I want to drive home. I feel like sometimes people want me to feel bad about having played the character and I don’t know why. They’ll even try to ask me questions or to take a conversation in a direction that is more needling than inquisitive, so I don’t get it. I just say, I kind of get it in the sense that there’s a lot from the 90s that we look back on and we go, ‘Oh my gosh, I can’t believe we did that.’ That sentiment makes people geniuses in hindsight and for what the 90s were, I felt like, for the first seven seasons of our show, it was as good of television as you were going to find back then.

You played two characters on Family Matters. I feel like people don’t give you enough credit because once you took off the glasses people forgot about Steve Urkel and fell in love with Stefan Urquelle.
I had to point that out too. Now don’t get it twisted, everywhere I go the women call me “Stefan” first (laughing).

How did you navigate being a child actor? Your mom was your manager since you were three years old. Do you think that helped you stay on the right path?
Hugely! I can’t believe still to this day that no story has been told about a child actor’s journey. None, not from scripted or no film, nothing. It’s just the same tired narrative of, ‘Oh yeah, they all grew up, got on drugs and lose all their money.’ I find that more of an annoying narrative to be associated with than anything Steven Urkel. He’s fine, the cheques are still coming and the kids have nothing but great things to say about Family Matters. We also live in a Google age, so again, people close to my age don’t realize to what extent that, when somebody likes you now they Google you so they know your name and other projects that you’ve done. When I see people in their young 20s now, especially given some of the other work that I’ve done like being on Psych, they come up to me and say, ‘Hey, that’s Jaleel White.’ I like where I’m at now because I get to understand so many different generations. Our business wants to put you in a box with one generation.

Do you view Family Matters as a foundational Black show meaning, did it pave the way for shows like Black-ish, My Wife and Kids, Insecure, etc. ?
I don’t know about that part (laughing). On a poll with African-Americans, we just don’t rank high enough in terms of how much we kept it real. Our producers wanted us to be a universally received show. We touched on a lot of things and we dealt with police harassment, bullying at school and a lot of stuff that’s still relevant right now. But because we were not heavy-handed in the African-American sense of dealing with those things, we never really got much credit from the Black community. When we start polling Blacks about favourite shows from the 90s you got Martin, you hear Living Single and all those shows more than Family Matters, but those shows didn’t necessarily jump the pond like we did, so I take the accolades I get and the appreciation I get. In my opinion, I think we did a lot for the 90s more than we did for just African-American television.

You voiced Urkel again for an episode of Scooby-Doo (which airs on Aug. 8). How did that feel to reprise the character?
It was cool, fun and easy. I love Scooby-Doo so that’s where I get to be a fanboy. It follows the legacy of Scooby solving cases with random people. The reaction was actually a lot bigger than I thought. It’s super flattering when fans get excited because it lets me know again, how I felt in the booth, it’s translating to fans. Any time I ever feel good about what I’m doing with a character, other people tend to like it that much more, so I’m excited. I plan on watching with my daughter. I’ll probably put it on and not say anything.

Let’s say in about 10-15 years your daughter wants to bring you onto a show similar to what you did with your mom. Would you do it?
Oh yeah, absolutely! My daughter’s got her hands full with me. My daughter is actually very much like my mother so, unfortunately, I think it would probably go the same way. It would be 50 Ways to Kill your Daughter (laughing). I don’t think it would be the other way around. My daughter is extremely cautious.

(This interview has been edited and condensed.)