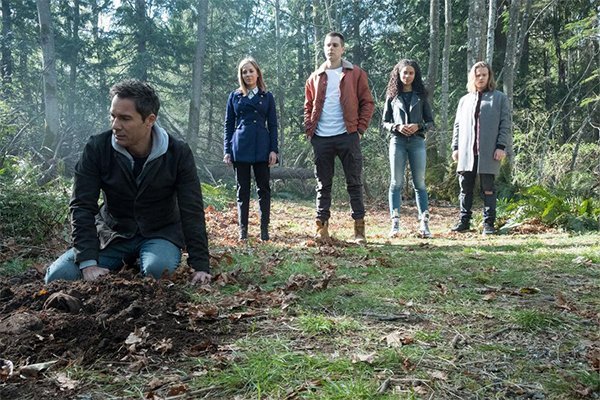 ‘TRAVELERS’ WEARS ITS CANADIAN HEART ON ITS SLEEVE

Travelers is a testament to the talent in Canada’s film and TV industry, says the man who created the sci-fi show.

“Every other show I’ve ever done we’ve flown out people from L.A.,” says Brad Wright, who was also behind the series Stargate SG-1, Stargate: Atlantis and SGU Stargate Universe, also made in Vancouver.

“It’s a testament to the growing pool of talent in Canada … Vancouver’s got a real wealth of talent and so does Toronto,” said Wright following a sneak peek of Travelers’ third season this week at Toronto’s Scotiabank Theatre.

“I don’t have anything against Americans or people who are British, but my rule is we look here first.”

The show is about special operatives from the future whose consciousnesses are transferred into people in the present in a bid to save humanity. It boasts an all-Canadian cast and crew led by Toronto-born and raised Eric McCormack.

It’s set in the U.S., however, and it took an American company, Netflix, to keep the series alive for a third season, which debuts worldwide Dec. 14.

The show was on the bubble after its first two seasons aired on Canada’s Showcase. But before Season 2 ended in December 2017, “we did a small (writers) room at my house here in Toronto for a couple of weeks, just so if we got picked up we knew what we were going to do,” Wright said.

And they’ll be “ready to pounce,” he added, if the series gets a green light for a fourth season.

Here’s a spoiler alert if you haven’t yet caught up on the first two seasons: when last we saw Grant MacLaren (McCormack) and his fellow travellers, their covers had been blown — not only with the families whose loved ones’ bodies they had taken over but with the FBI. So they are dealing with the fallout of all that in the new season while trying to keep their mission to save the world on track.

“Every one of our leads has a huge burden this season,” Wright said.

“After a while we all start to have our doubts and second guess,” added McCormack. “We’re still human beings that are fallible. We think we’re going to stick by the rules. We don’t.”

The actor has also turned director, guiding the Season 3 premiere as well as the Season 2 finale.

“My biggest influences always directed themselves: Woody Allen and Albert Brooks,” McCormack said, joking that “it turns out my collaboration with myself was much easier than I thought. I find me delightful and really open to my ideas.”

Turning serious, he added, “I’m so proud of everyone in this show.”

“He knows how to talk to an actor,” said Porter. “He doesn’t rush anything. You have all the time in the world to talk and come up with ideas together.”

“He’s like a kid in a sandbox, getting us hyped and enthused,” added Gilmore.

“What I love about the show is the leads are carrying secrets, always,” McCormack said.

“I also love the idea the characters come from such an awful dystopian future that little things we take for granted are giving them joy.”

Wright developed the series at the Canadian Film Centre, beginning with the idea of social media and “the things my daughters were putting out there (that) were going to be there for hundreds of years.”

He said artificial intelligence will be a big theme in Season 3.

“I’m not as afraid of AI as some people are,” he said. “We are heading toward AI being potentially dangerous,” but it could also be very useful if it’s used smartly, he added.